Turn your sound on.

Listen to the Press Conference on our Media Page

This “Call to Action” report being finalized for late August 2020 release, catalogs how each of the 50 states, across counties and institutions, collects highly inconsistent and inaccurate data of Latinx youth in the youth justice system.

Latinx/Hispanics are the youngest major racial/ethnic group in the U.S. Latinx youth are overrepresented in the justice system and receive harsher treatment than white youth. The majority of Latinx youth are arrested for non-violent offenses yet many are removed from their homes and/or sent to locked facilities far from their homes. Secure detention exposes youth to adult prison environments, not community and family-based interventions proven to be most effective. (Justice Policy Institute)

Analyses of disparate treatment of Latinx youth in the justice system, 2002 ¿Dónde Está la Justicia? & National Council of La Raza’s Lost Opportunities: The Reality of Latinos in the U.S. Criminal Justice System, document Latinos are not included in policy debates and that collecting data and counting Latinos is critical for reform or change to happen.

Failure to provide culturally and linguistically competent services contribute to disparities. Alternative programs have been proven to reduce recidivism and crime and lead to safe communities (Justice Policy Institute). The Latinx population is diverse and its members have varied histories in the U.S. Latinx youth, from indigenous to Afro-Latinos, are treated in the justice system with one approach not targeted for them and ignores cultural assets rather than customized cultural approaches shown to be successful. And, youth have not been included in the process, preventing the opportunity to design the most effective approaches.

"The voices and experiences of Latinx youth and their families are critical to implementing meaningful transformation in our youth justice system. For too long, Latinx youth voices have been unheard or unheeded within this system, an omission that has undoubtedly contributed to some of the inequities we continue to see today." Dr. Patricia Foxen Dep. Dir. of Research, UNIDOS U.S.

The Alianza, in the publishing of this report in partnership with UCLA’s Latino Policy and Politics Initiative, commits to Call to Action on collecting accurate numbers of Latinx youth in the youth injustice system and the need to end incarceration for youth with more funding and better community-based resources. 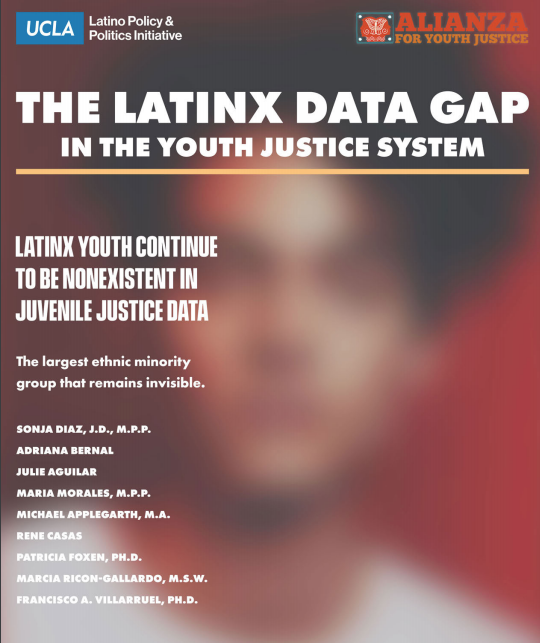